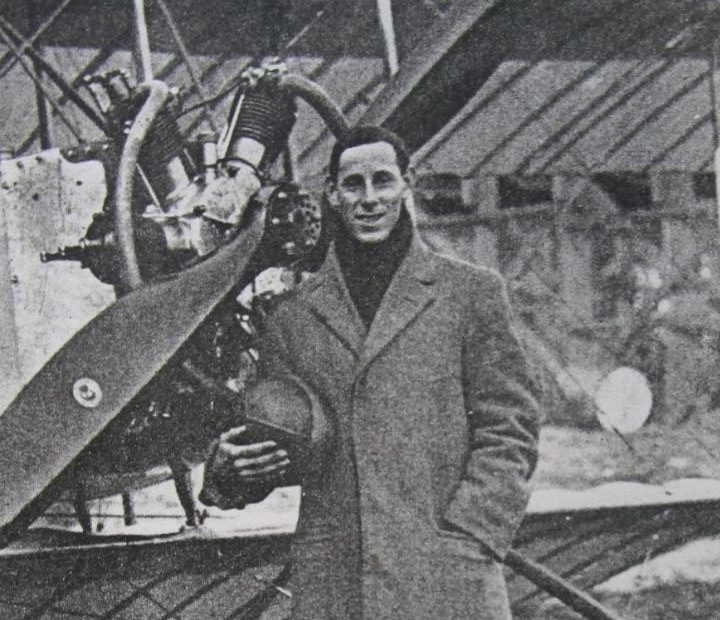 “On 21 January 1914, the Caudron aircraft arrived in Otaki from Wellington. It was assembled in a large tent on Mr Baucke’s land, 1.5 km from here.

The canoe (fuselage) was assembled by Ray Mann, Jack Ropata and Mr Thorndon.

Three days later Scotland tried to control the plane but failed because a skid was caught in a rut and a spar ‘exploded.’

On 29 January, the plane landed, and Scotland successfully flew a 20 -minute flight in a whirlwind five hundred feet above a field. The crash (information and the propeller) of his Caudron aircraft can be seen at the Paraparaumu Airport Museum.”

I have been aware of this, New Zealand aviation pioneer for some time and was pleasantly surprised recently to discover, near where I live, a monument to his early flights.

The flights took place from a field on the south side of the Otaki river adjacent to the present State Highway 1.

This young New Zealander learned to fly in England prior to World War 1 when he was just 22 years old.

I would like to introduce: Mr James William Humphrys Scotland.

As the son of a well-respected member of the NZ Legislative Council, the honourable Henry Scotland, you could say that young William had a good start in life.

Born in September 1891 to Henry Scotland and his wife, Mary Ann, Will as he became known, grew up with an elder brother in Pahi within the northern part of the Kaipara harbour.

The Wright brothers flying achievements in the USA seem to have fired young Will’s imagination and as a young teenager expressed an interest in building his own aircraft.

A good education in Auckland was followed by being apprenticed to a chemist there and sadly not a lot more is known of Will’s other achievements at that time.

No doubt, the exploits of other aviation pioneers were well known to Will and one can only imagine that with this knowledge and fascination of flight he finally resolved to become an aviator.

His father passed away when he was eighteen and on reaching his twenty first birthday, Will then became eligible to claim against his inheritance from his father’s estate.

Financial independence meant he could now travel to England and in August 1913 at age twenty-two, he began flying training at the “Hall flying school” at Hendon airfield just north of London.

In late summer of that year Will got-to-grips with the School’s Bleriot and Caudron aircraft; taxi runs, short hops and low circuits followed as his confidence grew.

The training continued with circuits up to a height of around 100 meters and several cross-country flights.

By October, he had achieved his “British Aviators Certificate number 658. (the second New Zealander to do so)

Amazing even by today’s standards, from excited novice to certificated pilot in around eight weeks!!

And, the Caudron biplane must have made an impression on Will, he bought one!!

This Caudron biplane aircraft was of French design and built in England under licence.

Will Scotland remained in England till the end of 1913, no doubt continuing to gain flying experience, enjoying the general aviation culture around Hendon airfield, making his plans to return to New Zealand in early 2014, with his aircraft and to further his flying ambitions.

The power to fly

The forty-five horse-power available for powered flight came from an Anzani six-cylinder radial engine as fitted to this Caudron biplane,

The designer: Alessandro Anzani, produced the six Cylinder 45hp engine in 1910 from his existing three-cylinder engine design which had famously powered Louis Blériot’s record flight across the English Channel on the 25 July 1909.

A second row of three cylinders was added in-between the original three, they were placed slightly to the rear of the first three cylinders and fitted to an additional crank-web which was incorporated on an extended crankshaft.

Preparation for the Otaki flight.

A commentary referring to the arrival of Mr Scotland and his aircraft.

“A thoroughly good aeroplane of acknowledged capacity to do the work, has arrived by the ship “Rotorua” and has now been landed.

Mr. Scotland has not yet made his plans for a flying campaign, but he is out here to fly, and when he has studied the conditions of air currents and landing grounds, he will give exhibitions.

Where he will make his first flight is not yet settled, but the possibilities of Wellington will certainly not be overlooked.”

With the help of two other New Zealand aviation pioneers, Mr Percy Fisher and Mr Arthur Schaef and together with a Mr Chorlton, a suitable flying field was found. Located about 3 km south of Otaki over the river on the coast side of the main road, the field was thought to be satisfactory and permission was granted for its use.

On 21 January 1914, the Caudron biplane aircraft arrived in Ōtaki by rail from Wellington.  It was assembled in a marquee on Mr. Baucke’s property, approximately 1.5 kms from the present day memorial site.

Three days later, Scotland attempted to fly the plane, but failed when a skid caught in a rut and a spar was broken.

The damage is clearly visible in this enlargement.

If you follow Te Waka Rd south toward the Main highway, you come across an area that looks uncannily like the 1914 image of the “Blue Bird’ showing the aftermath of the first test flight attempts.

By 29 January 1914, the damaged Caudron aircraft had been repaired by Mr Schaef and Will Scotland went on to make a successful 20-minute flight, circling the field south of Otaki at five hundred feet.

Of interest to me the is the following reply reputedly made by Will Scotland when questioned by the assembled crowd as to why is was taking some time to effect the repairs to the Caudron.

“We are also extremely lucky that a photographer, was on hand to record the events at that time.”

A well-presented memorial to Will Scotland can be found in a Rest Area on the South East side of State Highway 1, to celebrate the first sustained flight in the Wellington District on 29 January 1914.

The memorial presents a good description of Will Scotland achievements and I would encourage interested listeners to visit this site if possible.

As of November 2018, and near to the memorial site, which is temporarily closed for public access, much progress can be seen on the new Kapiti Expressway bridge to carry the northern extension towards Levin……

Apart from the propeller in the care of the Kapiti aviation museum, I wonder what other tangible remains of Will Scotland aircraft exist.

It has been recorded the 45 hp Anzani engine did survived the Wellington crash. Does it still exist somewhere in New Zealand?

In several photographs of Will Scotland, he can be seen wearing (or carrying) his French made ‘Roold’ flying helmet which was ‘De rigueur’ during the time of his learning to fly in England.

I wonder if it survived and where it is now??

I would like at some point in the future to investigate the first cross country flights attempted in New Zealand back in the day by Mr William Scotland.

The 105th anniversary of these flights is in March next year – stay tuned to 104.7